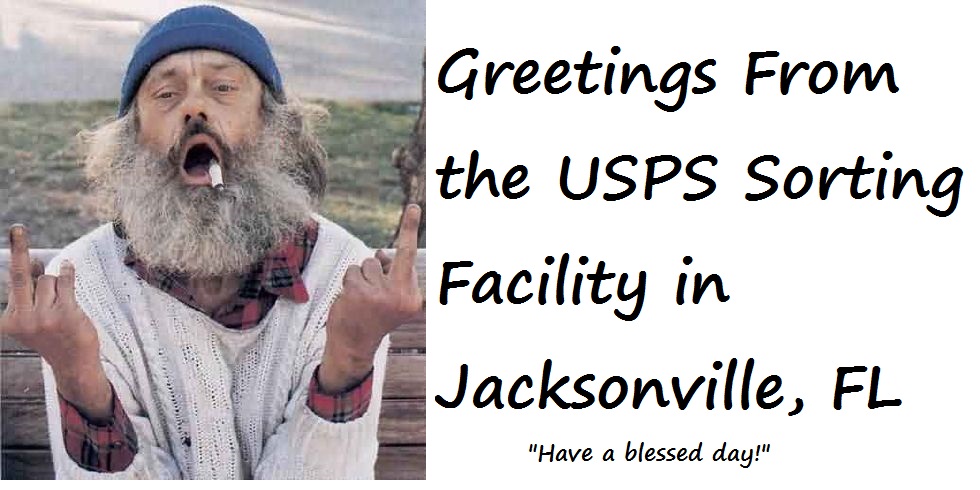 Now, I’ve been dealing with holiday mail delays for over 15 years.  The USPS used to say there were over 100 million packages being sent in December and that was a pretty old statistic so I’d wager the number is much higher now.  With that in mind, packages in December are usually delayed.  Sometimes due to weather and sometimes do to being overwhelmed by the number of packages.

Sadly though, sometimes it is just incompetence, such as the case of the sorting facility in Jacksonville, Florida.  It all started back in December of 2014.   I was I was shipping hundreds of packages six days a week.  After Christmas, I would usually get an e-mail or two from irresponsible buyers who waited until the last minute to make a purchase and then expected that the waves of packages would part so their package would miraculously arrive without any holiday delays.  I would give them a reality check and we’d be good.

Then January 2015 came along and I was hit with a lot of “Where’s my item?”  At first I just gave the usual explanation of 100 million packages and many people sending late gifts.  But then I started seeing tracking numbers where packages were sitting in one location for two and three weeks at a time.  That location?  Jacksonville, Florida.

We brought it to the attention of our local post office.  They said that USPS tracking is unreliable and even though it says the package is in one spot, it isn’t necessarily there.  It could be stuck somewhere else and just not being scanned.  It was particularly frustrating for me because if I shipped 200 packages in the same day, 190 to 195 of them would go through Jacksonville’s sort facility with little delay.  It was just those 5 to 10 that appeared to get snagged.   It wasn’t just me either.  One day my shipper was dropping off packages at the post office and a man was at the counter yelling about delays of his own packages sitting in–you guessed it, Jacksonville!

My “stuck” packages did eventually arrive.  No damage, no tread marks, no inspection notices.  I assumed it was just a temporary problem for Jacksonville.

All was good again until February where another couple of days there was more incompetence.  Then business as usual until March when it began happening again!  So at this point I am really ticked off.  I file a complaint online and get a phone call from my local rep.  She says she’ll investigate.  Packages arrive and aside from some negative feedback on Amazon, I am good.

In October 2015, again I experience it.  I also did some research and it seems that the USPS closed a number of sorting facilities and those staying open like Jacksonville are receiving more packages.  Ok, so more staff has been hired/transferred in to those locations and I could deal with the January hiccup but February, March and now October?  This is getting ridiculous.

And now we have December 2015.  I don’t know what has happened until the complaints start coming in at the end of December and early January of this year.  I’ve had enough though.  I file mail theft and missing package reports for each item.  My local rep contacts me again–why they refer me to the local rep makes no sense.  It is Jacksonville that is dropping the ball.  In each of my reports, I provide the same 4 tracking numbers so that any complaint addressed is aware of there being multiple offenders.   My local rep is as confused as I am.  Naturally, the day after my complaints, all 4 packages are delivered.  But I tell the rep that it is not enough.  We need to get to the bottom of this.  So she tells me that she will escalate my issues to the consumer affairs department.  Yay…until consumer affairs calls and I’m not there to answer the phone…  before I get into that though, here’s screenshots of some of the tracking information.  I took these so the next time a buyer is waiting on their package, I can say “see, I’m not scamming you, this has happened before!” 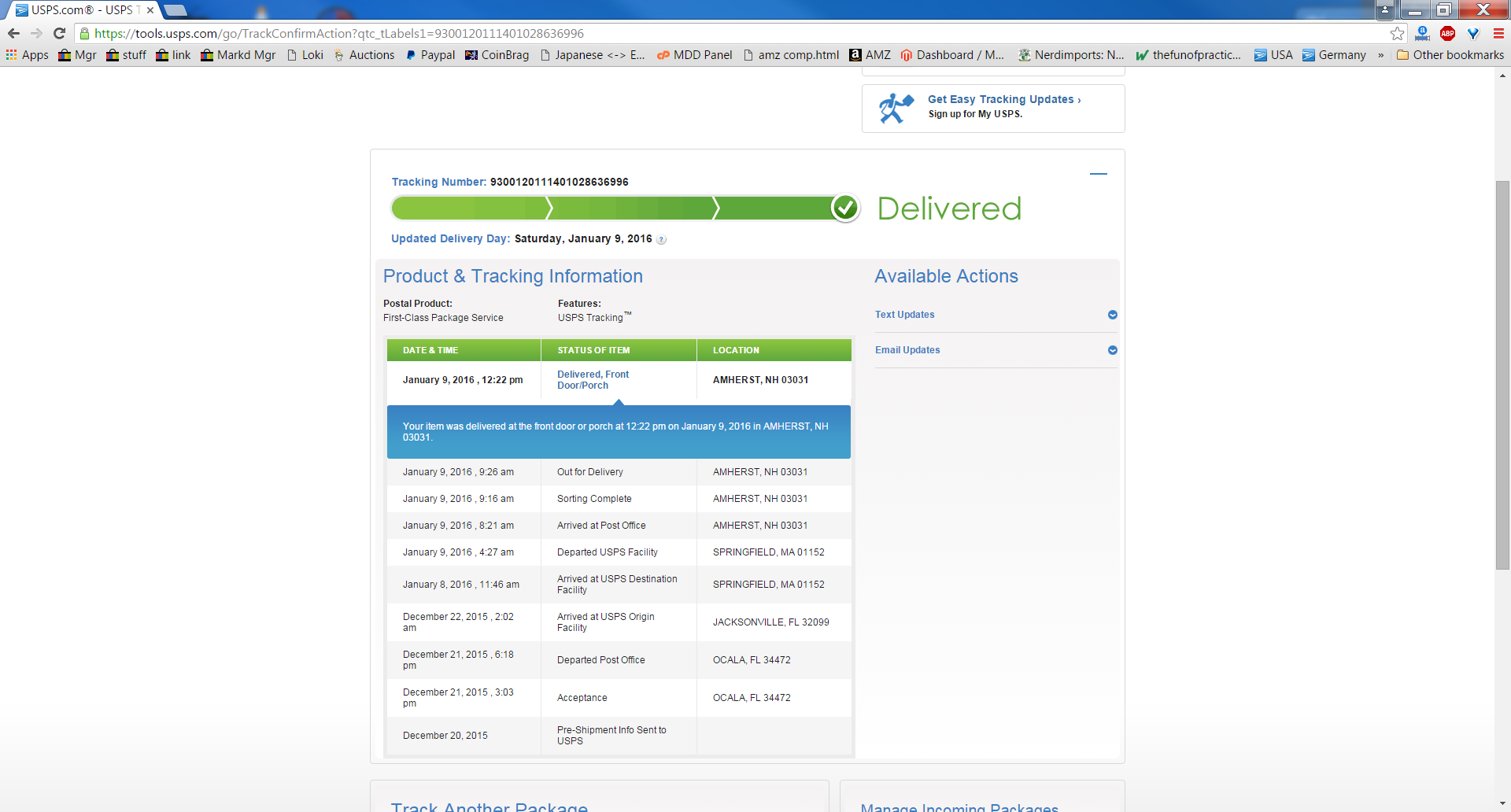 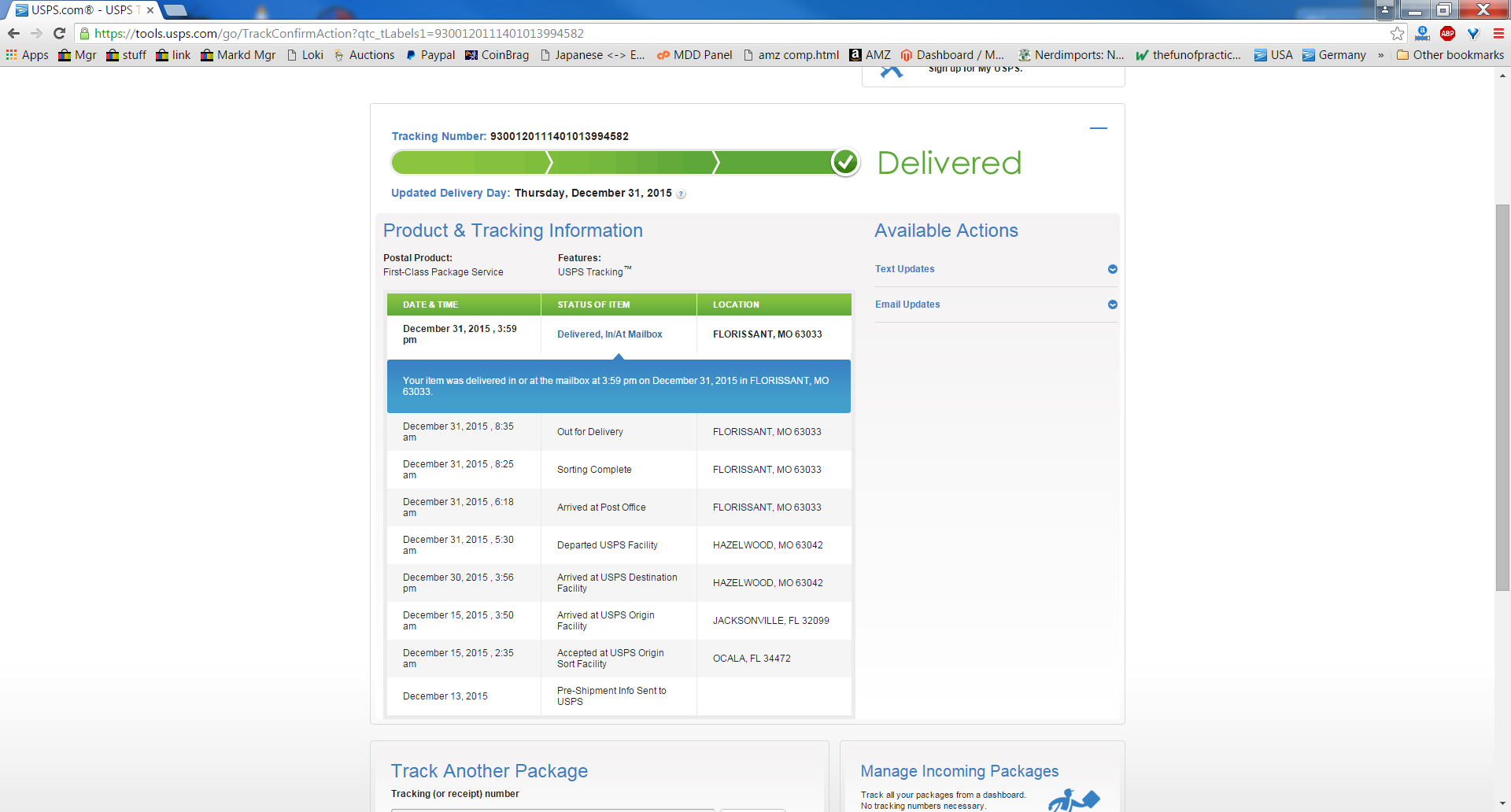 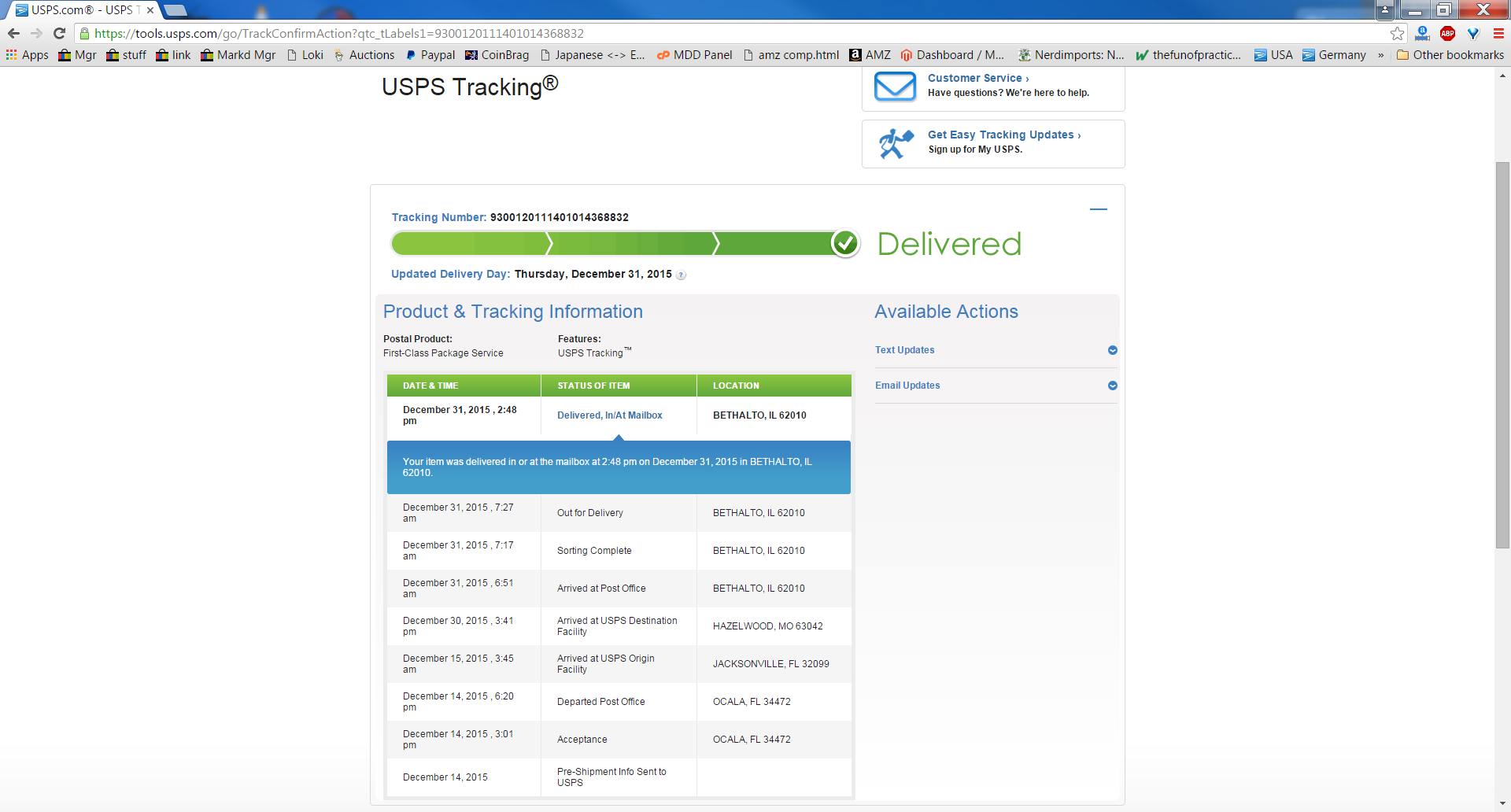 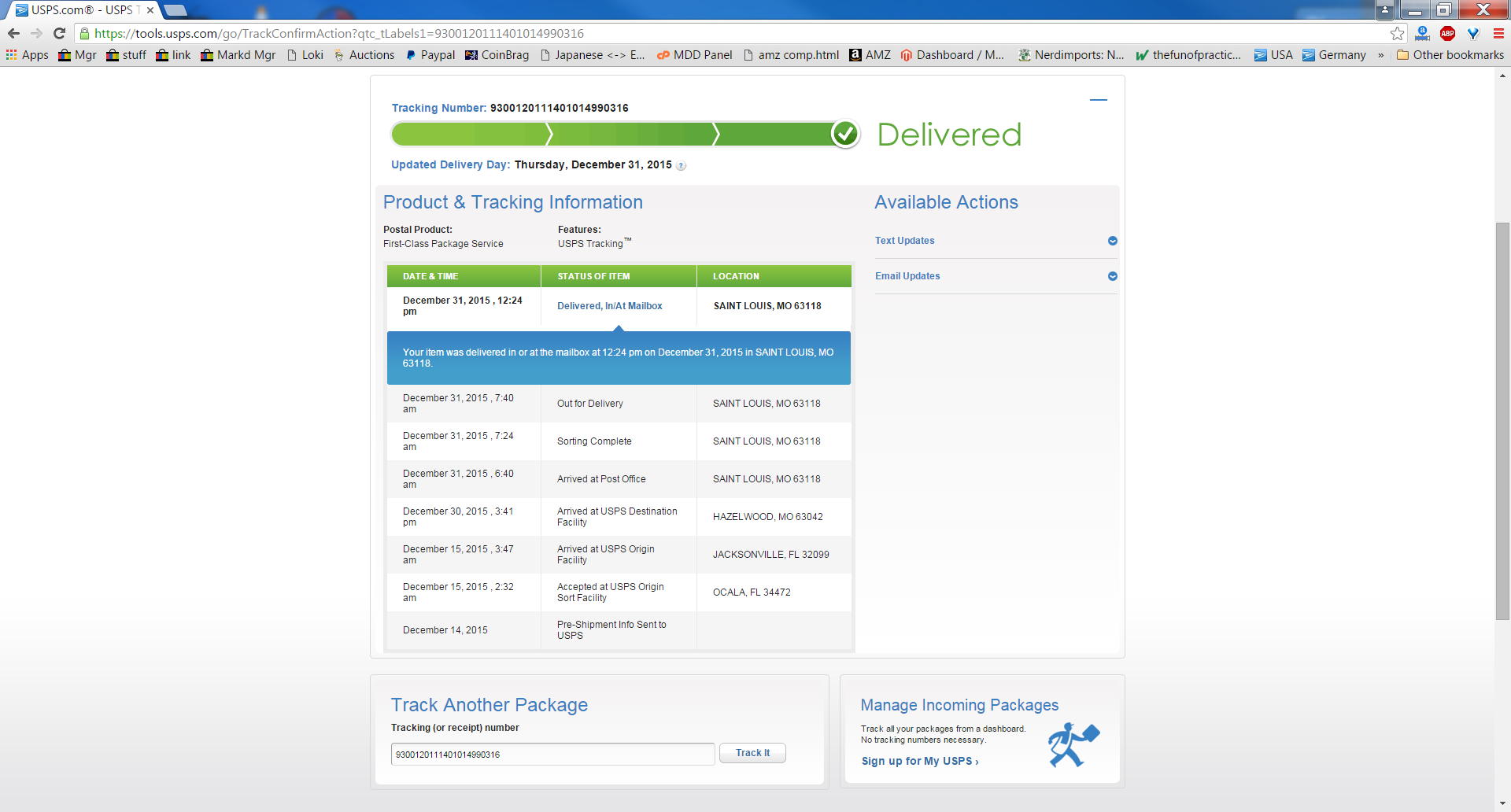 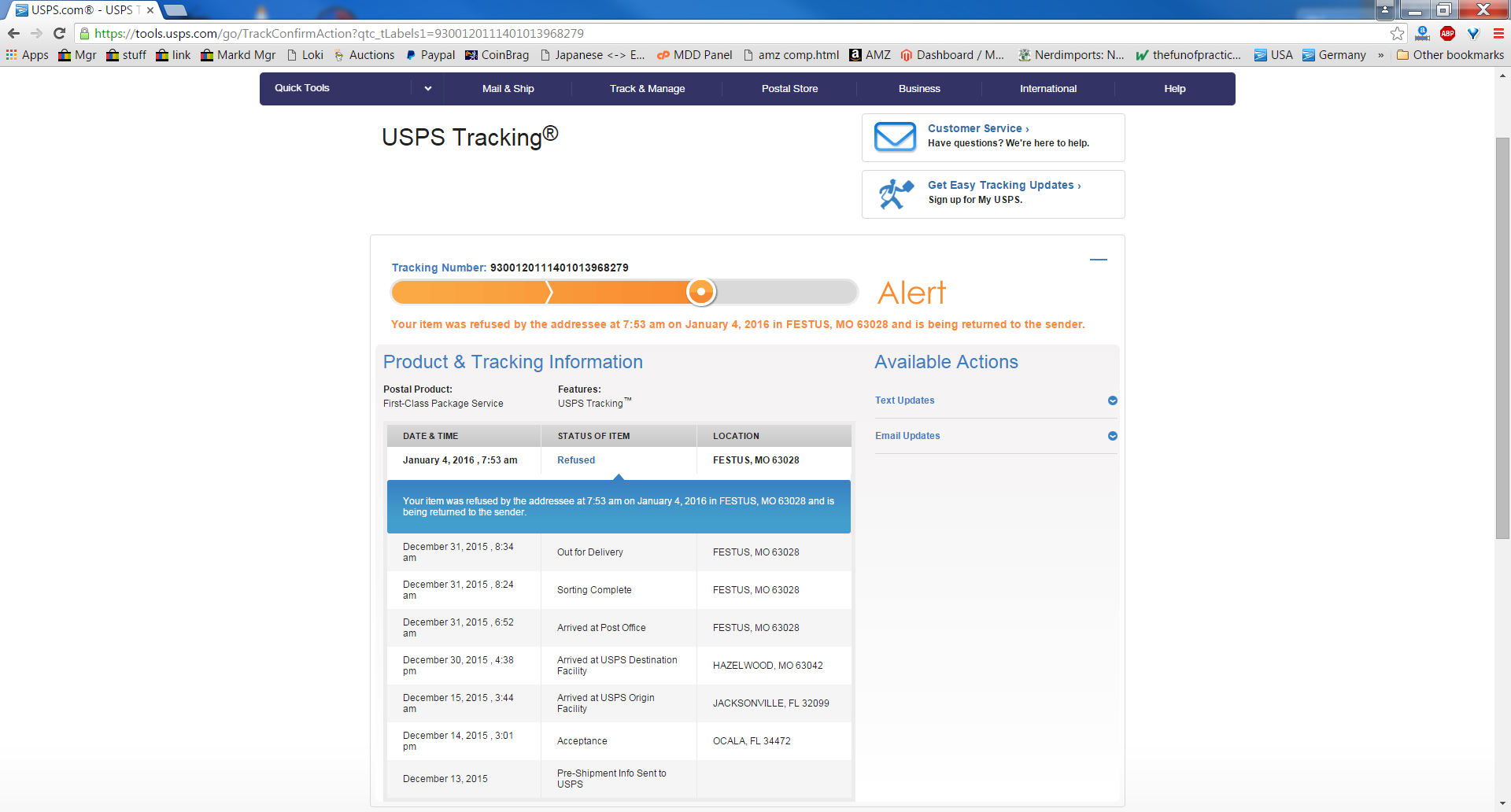 So I wasn’t home when the girl from consumer affairs calls.  She leaves a message.  I can’t understand her name–its her first name only anyway.  She tells me that all four packages are now delivered.  She understands I’m unhappy about delivery time and that the USPS doesn’t guarantee delivery dates for any packages other than express.  She hopes I have a blessed day.  End of message.  No return phone number.

She must have been from the Jacksonville location or their incompetence is spreading.  She seems to have no question at all as to why packages are sitting for over 2 weeks at a time while others mailed the same day, the day after and even a week after are being delivered just fine.  I just don’t understand how someone can fail to be at all inquisitive of such things.

So I am far from done dealing with this issue.  I will go to the top if need be.  If you are experiencing similar situations with the Jackonsville sorting facility or any other USPS sorting facility, please share!  The more tracking numbers I can acquire, the better.