The quality isn’t super great but leaked stuff rarely is. However the sound was great. I’m excited. When the trailer is officially released I’ll post an update. Warner Bros has been pulling these down all day so if it doesn’t play, I’m sorry. Enjoy!

[UPDATE: Warner Bros. has released the HD trailer as expected, you can watch it below]

Update: If that stops working, I uploaded the video onto our facebook page: Nerdimports on Facebook be sure to like us while you’re there. I’m not spammy!

Thanks to Cosmic Booknews for bringing this to our attention! Also if you haven’t seen the Batman Vs. Superman Trailer, this was also released at Comic-con:

Why did DC make the Batman Vs. Superman trailer public while trying to hush the Suicide Squad? Perhaps they were saving that one for another special occasion. 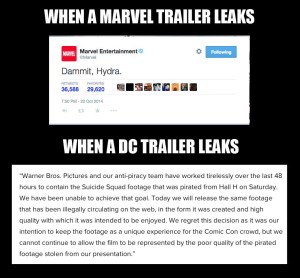