The one thing the Netflix shows have in common so far is they are all slow-burners.  There’s nothing fast pace about them.

I don’t know how Luke Cage the show compares to the comics.  I don’t believe I have read any comics with Cage in them unless there’s an Avengers comic from the 90s somewhere I read as a kid and just don’t recall.

When he appeared in Jessica Jones his character didn’t do anything to really stand out for me and so far JJ has been my least favorite of the Marvel shows. Which was a surprise because I went in wanting to love the show…plus it had David Tennant as the villain and isn’t he everyone’s favorite Doctor?  He’s definitely mine.  Still, I just didn’t care for that show.

Luke Cage on the other hand was just interesting in every episode.

The episode with Method Man and the bullet-ridden hoodie was awesome!  I’m surprised none of my Marvel hoodie vendors were trying to sell hoodies with bullet holes in them–even just printed onto the fabric.  Actual holes might cause customer service issues. 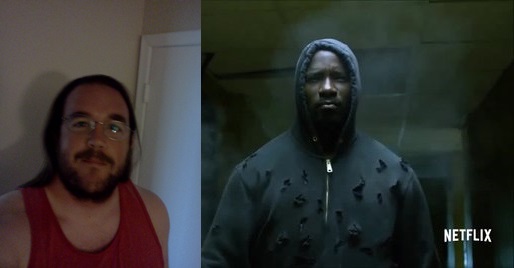 I have never cosplayed before but I am thinking Luke Cage would be an easy costume for me.  I’m white and really white; I don’t tan, I burn.  So I imagine it might be controversial for me to actually do it but if I just gotta poke holes in a $10 Wal-mart Hoodie then that seems doable.  I won’t be shaving my head so I’ll be the bizarro-world Luke Cage where he has long brown hair!  Kidding.  Not kidding!  I don’t know.  Did I mention I’m overweight too?  The haters will have a field day but I’m an attention whore so any attention works for me! Thoughts?

So yeah, if you haven’t seen Luke Cage and you like Marvel’s universe then go see it.  From what I’ve glanced at online, the consensus is that it is a great show.

The next show to come out is going to be Iron Fist.  I hear there are some concerns in the Politically Correct forum because Iron Fist is a white guy who knows martial arts with Asian roots.  Apparently there are no white people in the real world who know karate or kung fu so this is obviously offensive to everyone.  Sarcasm aside, I know about as much about Iron Fist the comic book character as I do about Luke Cage.  I believe Iron Fist is another billionaire like Bruce Wayne (who also happens to know Martial Arts and I think he’s usually white), Oliver Queen and Tony Stark.  I am optimistic about the show and I hope any hatred is just from idiots complaining about PC or lack there of and that the show won’t actually be bad.

Normally I end my posts trying to sell related merchandise however, I don’t currently have any merchandise for Luke Cage aside from a single pair of crew socks and I think I’ll be keeping those for myself. If you really want a pair there are other sellers out there just click on this pair of socks below:

In the future I may come back and edit this article should I come across new licensed Luke Cage merchandise. If so, hello to me in the future! Hope all is well. I suppose time travel hasn’t been discovered yet or you’d be able to send me some winning lotto numbers or a sports almanac!