On April 16-19, The Star Wars Celebration took place in Anaheim, California. The 4-day event included a variety of events, panels, contests and interviews. I was not aware of the event until after the second day but I was able to view the hours of footage that Disney uploaded. Carrie Fisher and Mark Hamill both had some entertaining interviews that you can see on Youtube.

For those playing Star Wars: The Old Republic, codes were given out for in game rewards. Best of all? When you use the code you are given another code that works for five friends. Even better–each of their codes works for 5 more people as well. One of my friends shared a code with me and after using the code I received a Cantina Crate in the mail. 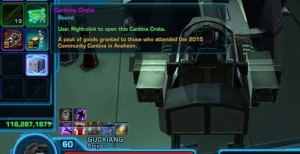 So I opened the crate and inside was a Prinawe Congregate vehicle and a Deep Pink and Deep Purple Dye Module. Both were bound so I used the speeder. It is very pink!

Thanks to Bioware for the cool freebie!

For more about the Star Wars Celebration check out the official website for the event. Looks like next year’s event will be in Europe.