Star Wars has an amazingly vast universe. What started with a few movies expanded into over 150 books, multiple comic book series, dozens of games ([electronic games]

and [pen and paper]

) and even multiple animated series. The best thing about it all was that it was considered canon. The stories beyond the movies were considered the “Expanded Universe” (EU) and it was vast. Tales took place thousands of years before Star Wars: A New Hope and continued over 100 years beyond the events from Return of the Jedi. The Holocron Continuity Database was used by Lucas Licensing to keep track of all things Star Wars.

In 2012, Disney acquired Lucasfilm and ownership of Star Wars. Then Disney did something awesome. They told us they were going to give us 3 new movies, episodes 7-9 starting in 2015! However, there was a cost: In order to have the freedom to tell new stories, Disney needed a clear path to tell their stories unhindered by stories outside of the movies.  This meant the Expanded Universe had to go. Which sucks because for a lot of us, the EU is the best part of the Star Wars universe. The movies were good sure but they were a bit campy(yeah I said it). From my experience, the EU tries to be more serious. For the last 3 years I’ve been playing within The Old Republic, 3,500 years before the Battle of Yavin.

So what happens to the EU now? It is now classified as “Star Wars Legacy.” Some of it may end up being canon while a good portion of it will no longer be considered official Star Wars story. So what is Star Wars canon now? All 6 movies, the Clone Wars movie and cartoon series along with the new animated series Star Wars Rebels.  Any books or games published after April 25, 2014 will also be part of the new Star Wars canon…at least until some point in the future when Disney or a future owner decides to reboot or just scrap things… but at least for the next few years they’ll be canon.

So recently I’ve seen a couple of forum threads where people ask, if you could bring an element from Star Wars Legacy into canon, what would you bring? There are two answers that seem to be the most popular: 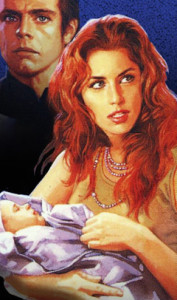 Mara Jade Skywalker, wife of Luke Skywalker and mother of Ben Skywalker. She first appeared in the Thrawn Trilogy, a series of books written by Timothy Zahn in the 90s.  She’s not just some hero’s love interest, she kicked ass as an Emperor’s Hand, smuggled and even ended up on the Jedi High Council.

I think both characters have played their parts in their stories.  If either were to appear in future Star Wars tales, I suspect they would be altered and we’d end up with fan outrage.  Remember when the Michael Bay Ninja Turtles were going to be aliens in his movie reboot? I used to sell a t-shirt that summed up fan opinions on alien turtles: