I’m back with more to discuss regarding SWTOR. This is part two of a series with likely many more parts. First I want to get into flashpoints.

Flashpoints are repeatable instances for 2-4 players that seem to last 30-60 minutes. The first flashpoint for those starting on Korriban or Hutta is called “Black Talon.” Now this is a group mission and there are cut scenes with choices for your character to choose. Of course, everyone shares the cutscenes and randomly one of your choices is displayed for everyone in the party to watch. What’s interesting it that what is shown to all is not necessarily the response chosen by the majority. The other night I was with a group of 3 others and 3 of us chose the dark side option while the person choosing the light side option ended up having their choice viewed in the cut scene. I don’t want to spoil the story for those that haven’t done it yet but it’s fun when each time what happens is a bit different.

Yesterday I made a Sith Warrior. I did this because my game buddy was unavailable and I didn’t want to get too far ahead of him with my inquisitor (now specialized as a Sith Sorceror). In just a few hours I was able to get the character to level 10. Much faster than my first time fumbling through the game. I like that this character’s story line has many different quests from the inquisitor. In other games, leveling alts tends to suck because you’ve done the quests before.

Another cool aspect in this game is the “Legacy” system. There are a number of achievements to be made for your Legacy and I’m not yet clear on all of the details but each character on the same server will share the legacy (Republic and Empire alike). You get to name the legacy as early as level 10 though you have time to think about it(my friend was level 50 before he decided on a name). Since I named my Sith Inquisitor “Xiaolongnu” after Xiao long nü from Return of the Condor Heroes, I chose to use “Condorheroes” as my legacy. Now I probably should have just done “Condorhero” as the name of your character can be displayed as “Xialongnu Condorheroes.” I opted to show my character’s name with the legacy beneath and with that, Condorheroes works. My new Sith Warrior, Munianci (named after Mu Nianci from Legend of the Condor Heroes) is part of the Condorheroes legacy.

Why am I using Condor Heroes characters for my Star Wars characters? Well the short answer is “Scithe” was taken when I was looking to name my Sith Inquisitor. I’m Scithe whenever and wherever I can since I first started using the name on AOL back in 1996. I’ve used other names but I wanted something new that I’ve never used. I really loved the Condor Heroes trilogy. If you’re not familiar the trilogy is one of the greatest stories to come out of China–yet the books have never been officially translated into English. I’ve not yet read the books myself though I have viewed the recent live action Television shows. When I have more time I’ll consider devoting a post to the Condor Heroes.

My Sith Warrior’s companion, Vette, is not easy to please as when choosing the path of the dark side. With my Inquisitor, the companion was pretty much happy any time I wanted to crush my enemies. This warrior’s companion doesn’t like it when I’m merciless. But I’m Sith, kindness and mercy for my enemies is not how the character should be played.

TIPS for poverty stricken characters: Throughout the game there are often elite mobs. The first one I found was at level 7. He is the “Slave Rebellion Leader.” The two guys with him are very easy kills. He’s on a 5 minute respawn and each time he drops gear, decent experience and a good share of credits too. Hope these photos help: 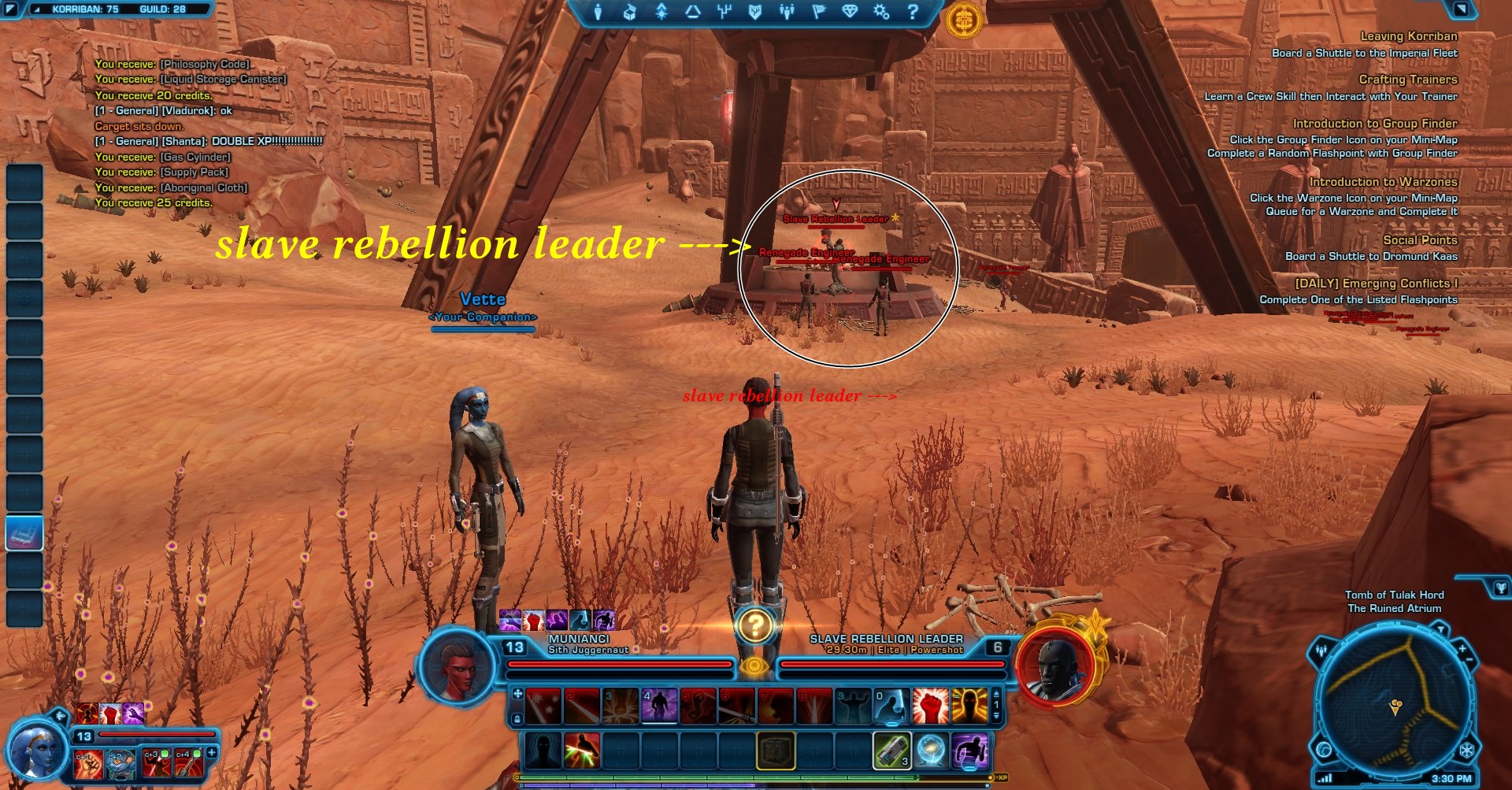 Once you get to Drummon Kaas, there’s another elite mob the Gundark Alpha. He’s level 11 and also has a 5 minute respawn. 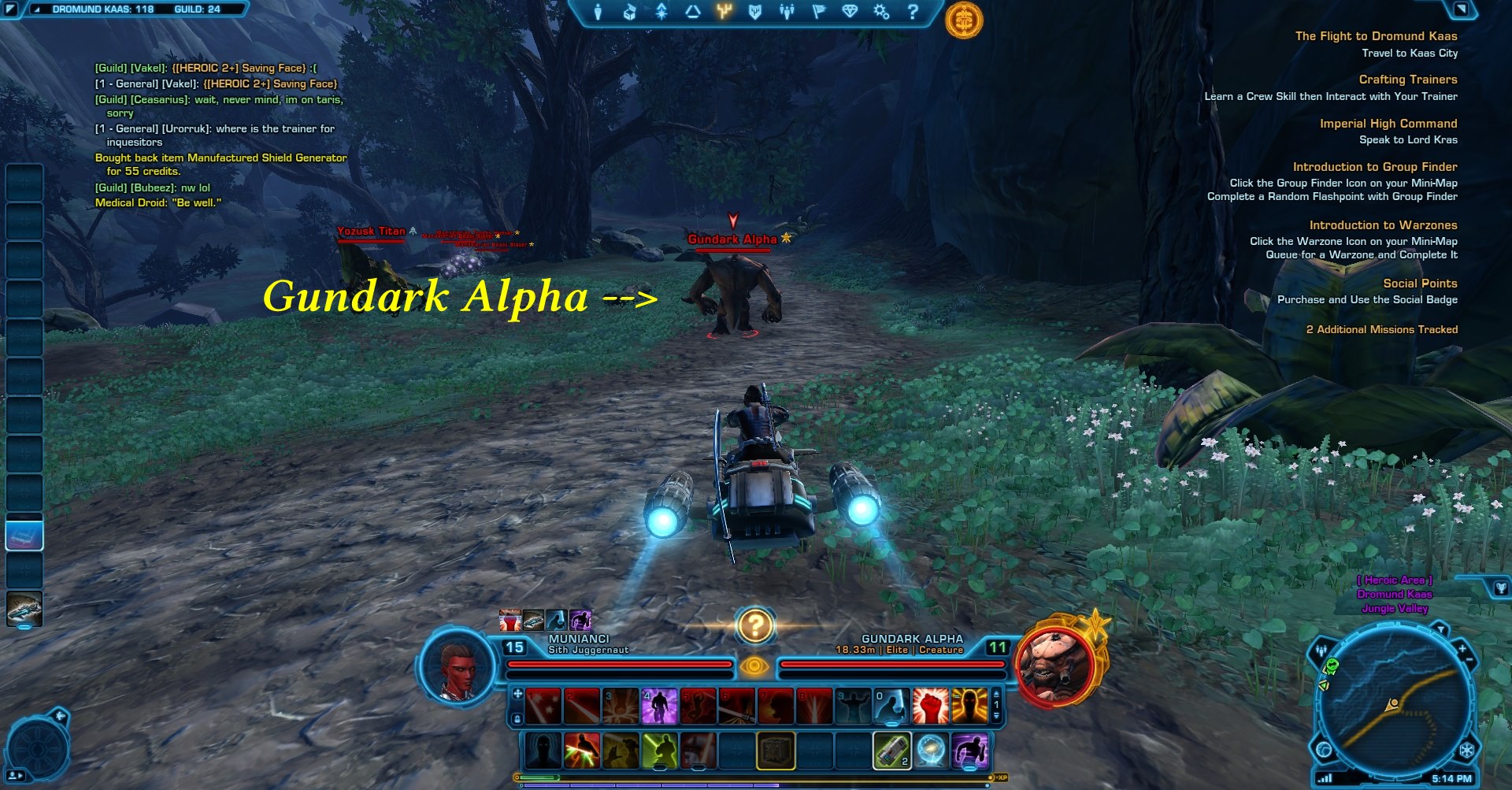 So I’m a bit of a pay to win player. I cashed in some real life money and got some credits. A million to be exact. For $10 you can buy enough Cartel Coins to get some of the “packs” which sell for 250,000-400,000 credits each on my server if you list them in the server’s auction house. The only drawback is when you buy a pack, it stays bound to you for 36 hours so you cannot sell it immediately. However, the exchange rate is far better for dollar to credits than buying from the gold farmers that spam their web addresses when they can. If you take a little time and browse the cartel market, your $10 can turn into 1.5 million credits in a few days. While the gold farmers want to charge about double that. Maybe you won’t get instant gratification but you probably won’t end up with a suspended account either.

So when you have that much money suddenly after only having 12000 credits, what stupid purchase do you buy? A fancy speeder bike called the Praxon Echo for 175,000 credits. My Sith Warrior loves it. 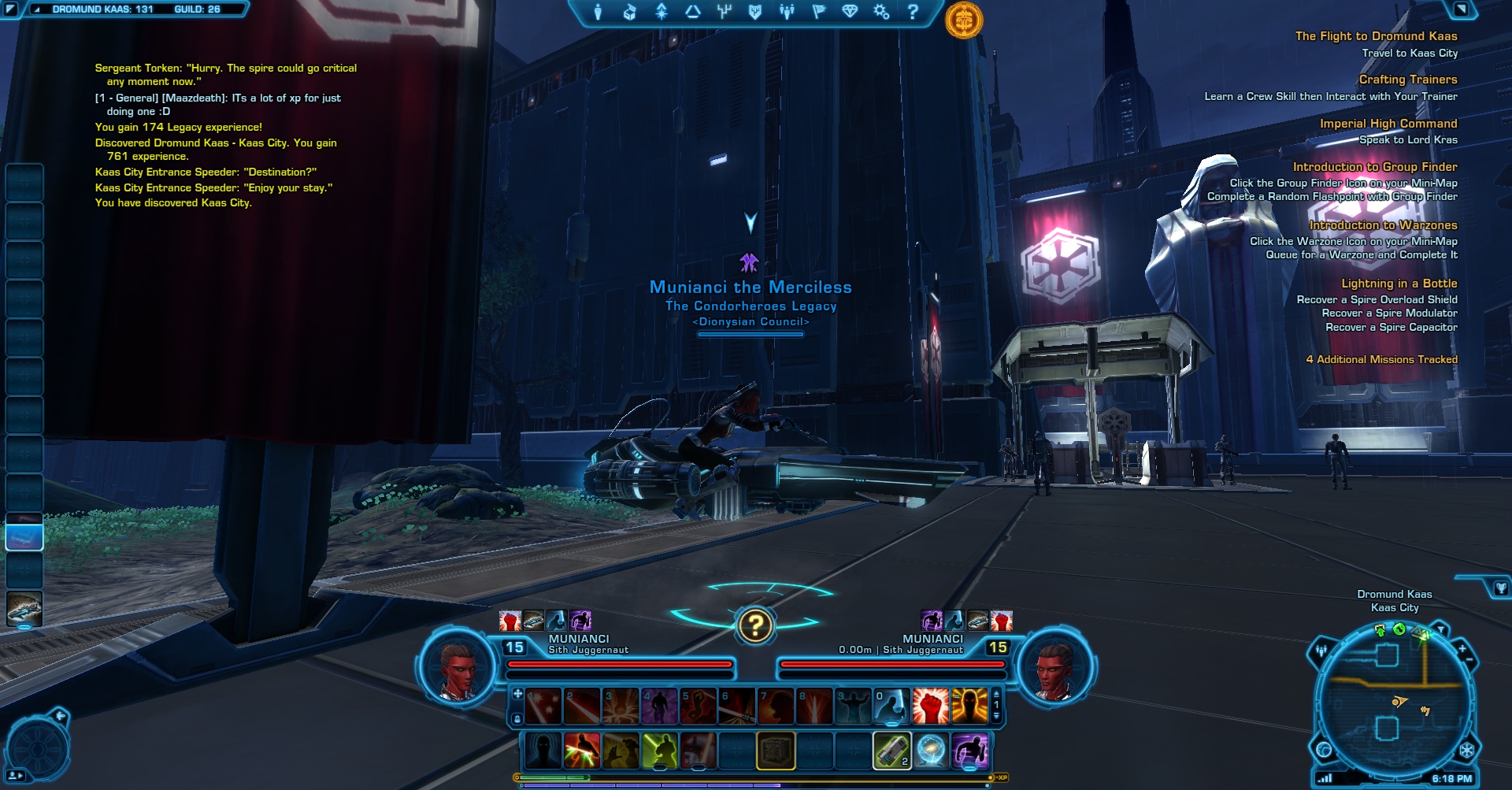 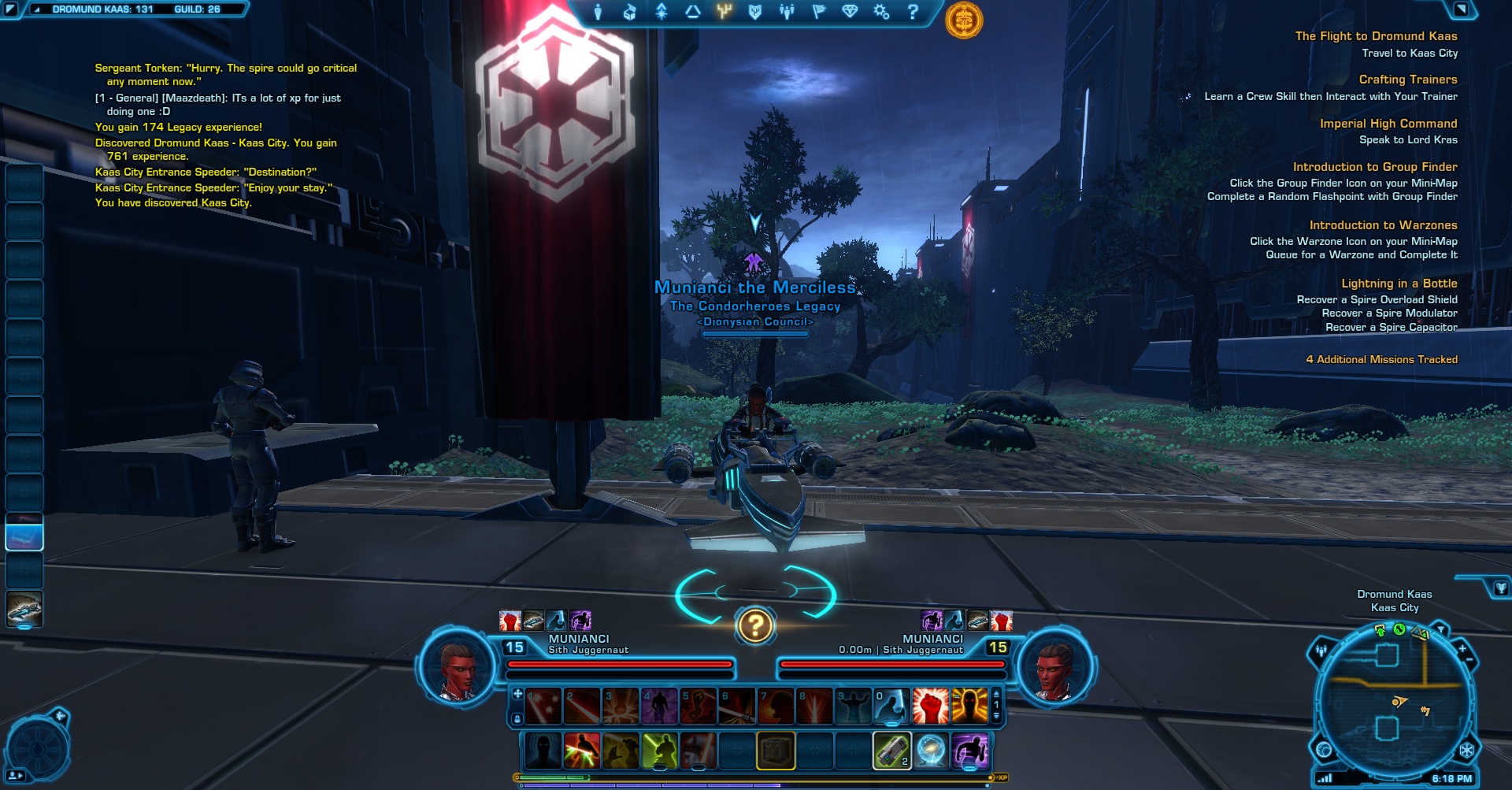