I just got done watching Batman: The Dark Knight Returns.  I loved it!  This animed movie was based on the 1986 mini-series written by Frank Miller.  I had not actually read the comics though they were on my on my list of must read Batman comics. Now if you weren’t aware, in the comics, there is more than one universe.  Unlike where Star Wars just scraps books and comics and says “these are no longer official stories,” DC Comics just puts those stories in different universes.  So The Dark Knight Returns takes place in what they call “Earth-31.”

Here’s some quick backstory:  At some point Robin #2, Jason Todd, is killed by the Joker.  Shortly after this Batman retires.  Not only that, but the Justice League has disbanded.  The Green Lantern (Hal Jordan) leaves the Earth to go fight bad guys elsewhere I guess.  Wonder Woman goes back to her island, Themyscira.  The Green Arrow is reluctant to retire and ends up becoming a one-armed terrorist since only Superman is the government-sanctioned superhero.   So The Dark Knight Returns starts 10 years after the retirement.  Bruce Wayne is now 55 and Commissioner Gordon is 70.  The Commish is also about to retire.  The Joker has gone catatonic as a world without Batman to antagonize is no longer worth participating in.

A new group of thugs appear calling themselves the Mutants.  Two-Face ends up going back to One-Face with the help of some plastic surgery– because he’s no longer ugly he is released from jail. Yeah, I realize that’s dumb but the rest of this movie has been pretty good so I’ll let that slide.  Naturally, he goes back to a life of crime and Batman comes out of retirement to kick some butt.  The Joker hears mention of the Batman’s return on the TV and this causes him to want to return to the party.

Along the way Batman picks up a new Robin, Carrie Kelly.  I thought it was a bit odd how easily he was to accept her as a Robin, but considering she introduces herself to him by saving his life, she has earned a shot.  It is amusing how Batman constantly threatens to fire Robin through the rest of the movie should she deviate from his orders.  This Batman is a lot grittier than he was in The Animated Series (TAS).  He’s pretty much all business, there’s no billionaire playboy sneaking out of fundraisers with a little kid in tow.  This Batman is here to kick ass and he’s not very nice about it.

The coolest thing about the Dark Knight?  He actually mounts a horse in this movie! 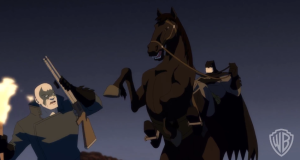 The Batman vs. Superman was interesting.  President Ronald Regan is portrayed as an aggressive cowboy president and eventually he tells Superman that it’s time to bring in the Batman.  The idea of anyone not being killed in one punch from Superman seems unbelievable, unless Superman holds back deliberately.  So really, any fight against Superman seems cheesy to me.

So if you’re a Batman fan and you haven’t already seen the movie then I definitely recommend it. The Dark Knight Returns was actually released in two parts with the first in September 2013 and the second in January 2014. A deluxe version with both is how I ended up seeing it. Below is a link to the Dark Knight Returns on Amazon in a few different options:

and also for the truly hardcore Batman fans some merchandise we have in stock today: