Ok if you are doing your best to avoid seeing this trailer and knowing who one of the villains possibly is, avoid this article.  Or scroll to the bottom where I shamelessly promote my Batman and Superman merchandise.

First, here is the new trailer:

Ok now did you see something that looked like either a really ugly ninja turtle or a modified cave troll from Lord of the Rings?  It seems that is supposed to be Doomsday.

Now the first question some of you might be wondering is, “When did Doomsday get Shoop Da Woop beam powahz?” 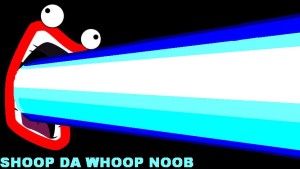 Great question!  As it turned out at one point Doomsday does get fire breath, so having a full on energy beam face is just another step further. 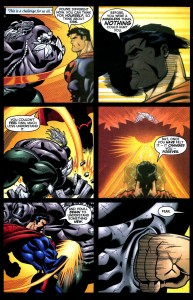 So after watching the trailer, ignoring Batman holding a gun (was that a kryptonite gun for Superman or is this after they are done battling?  meh who cares) I am suddenly much less excited to see this movie.  Will I still go see it in the theater this March?  Yes, I will but the bar has been set a lot lower.  Which is probably a good thing.  It will be harder to be disappointed if I am not longer expecting much.

Why am I disappointed a the thought of Doomsday as a villain?  I don’t know.  I guess because I read the [The Death of Superman] comics back in the 90s and enjoyed the story.  Wonder Woman and Batman were not involved.  Now, I do recall an animated special where Batman, Superman and Wonder Woman are battling a ton of Doomsday clones but that still doesn’t make it acceptible for me have him as a villain in this film.  I guess that’s because I’d love to see a Superman: Doomsday movie where Superman and Doomsday do battle to the death for two hours.

Of course there’s always the hope that it won’t be Doomsday that it’ll just be some weird Zod clone that shares Doomsday’s complexion.  For those of you wanting more Doomsday, back in June I had made a post which included an amusing video rant with a bunch of celebrity cameos.  Here it is again in case you missed it the first time:

Ok and now it is time for some shameless merchandise promoting!  If you weren’t aware, I sell lots of awesome nerd swag on eBay and Amazon.  These are the links for my current offerings on eBay: [Batman]

and for Amazon: Batman, Superman, and Wonder Woman.