So season four of The Walking Dead has just started. I hate having to watch shows on a weekly basis. I much prefer to watch the entire season at once. Unfortunately with shows like The Walking Dead and Game of Thrones, I don’t have that luxury as my friends love discussing both shows. So it’s either watch it weekly or live with spoilers.

Once a week just isn’t enough zombie action for me! So over the last few days I’ve been rewatching the series. I can’t believe how awesome the first season was! It was only 6 episodes long but so much happens. I’m currently on season three now. I had mixed feelings about this season. I thought the locations were cool but the Rick and Laurie story wasn’t that interesting to me. Don’t get me wrong, it’s not that I find Rick’s actions to be unbelievable. I would likely snap too in that situation. I am just hoping season four gets a bit more action packed. I also stumbled onto a photo from season three: 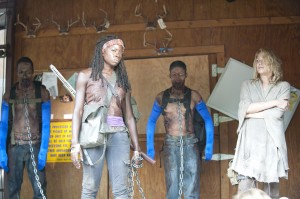 I thought that was pretty cool. Michonne is an interesting character and I hope we get to see more of her character this season.