I recently got around to watching Comic Book Men. As someone who has enjoyed Pawn Stars, I was wondering if this would be the nerdy version of that. Sure enough it is only awesome! I heard about the show a year or so ago and when I found out it was a Kevin Smith project I was definitely interested. Jay and Silent Bob cameos on a TV show? Shut up and take my money!

I loved the show. I was surprised that Kevin Smith is in every episode. The cameos they’ve had have been cool and the items they have focused on are all pretty interesting. Nichelle Nichols shows up looking for an Uhura action figure. Dean Cain arrives at a birthday party for Superman. Stan Lee shows up and continues being awesome. 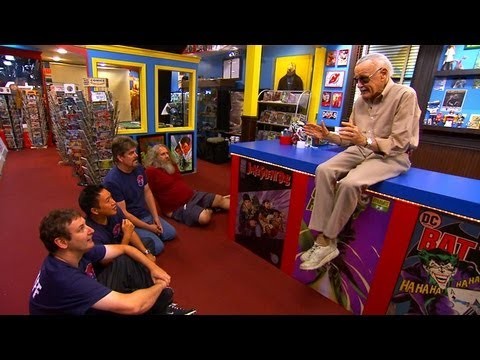 Now I know that reality shows are not real. I think most of us realize this. I was surprised to find out a few things about the stars of the show. Where? Listening to a number of the Smodcast podcasts. For instance, Bryan is said to just be a friend who “hangs out” at the shop. It turns out that Bryan Johnson worked at the Secret Stash at its old location back when it was named Comicology. Bryan also managed the West Hollywood location of the Sercret Stash. Mike and Walt actually do work at the comic shop. However, Ming is portrayed as being the low man on the totem pole of the comic shop. Actually though, he’s not actually one of the regular store staff. Ming started a fansite to Clerks back in the 90s. It got Kevin’s attention and eventually Ming was hired to do web design for View Askew. He’s been with the company ever since. In addition to the websites, Ming also edits all of the podcasts. According to Ming and Mike on “I Sell Comics” Ming has worked the cash register if Walt was busy/unavailable. But he’s not working a full shift behind the counter. Don’t get me wrong, I’m not stating this because I have beef with Ming. I just found it funny that the show portrays these guys a bit differently than reality.

If you don’t mind the occasional reality TV and you like comics, you should get a kick out of Comic Book Men. It’s a fun show and the guys are hilarious.