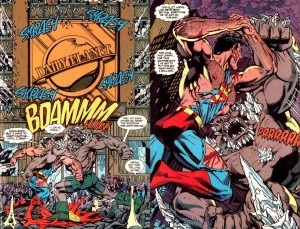 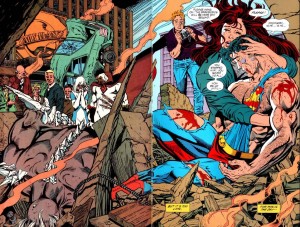 If you weren’t paying attention back in 1992, DC Comics decided to kill off Superman in issue #75 of Superman(January 1993). There were 3 versions of this book sold: A standard newsstand edition(actually there were at least five reprints marked with Roman numerals on the cover) 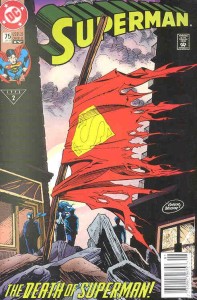 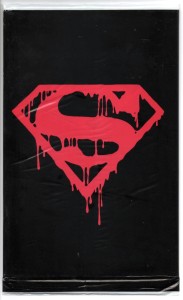 and an even more rare platinum bagged edition. The platinum being limited to just 10,000(well actually it seems there may have been more than 10,000). 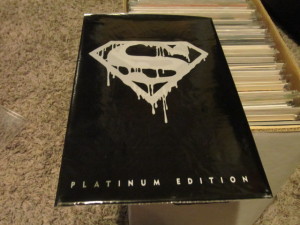 I was 11 years old at the time the book came out. I got the newsstand edition from a local video store that also sold comics. I had not been a big DC Comics reader at the time but I dove right in. Afterwards, my mom read it. She took it to work the next day so her coworkers could read it. This was big news at the time. Millions of people who were not comic readers or fans were eager to buy a copy (or 5) as an investment.

I snagged a trade paperback shortly after which covered the multi-comic crossover, [The Death of Superman] 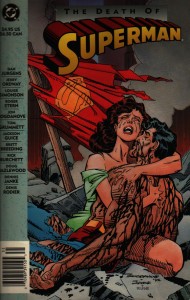 Of course, as you now know, Superman didn’t stay dead. He was back in less than a year. This upset a lot of people as many fans felt it was all a marketing ploy to sell more books. Sales of Action Comics never recovered after they began to tank following the return of Superman.

Today you can snag a copy on eBay for [about $1]

plus shipping for the newstand edition. The black bag variant runs [about $7-15]

. But I promised a rant, didn’t I? I found this video by Max Landis, a pretty funny guy. This video is actually over 16 minutes long but that is because it isn’t just a rant but a comical re-enactment of the comic story. You may notice some famous people making cameos as well.  This video is PG-13 for sure as there are some naughty words spoken.

The description mentions, “Starring Elden Henson, Elijah Wood, Mandy Moore, Morgan Krantz and many more.” I was excited to see Sarah Shahi among the “and many more” as well as Chloe Dykstra. Oh yeah and Simon Pegg too! Did I mention this video actually has an IMDB page? I rant frequently. I should really consider recording it!

As far as character rip offs go, Marvel and DC have been doing it to each other for years. Deathstroke or Slade Wilson becomes Deadpool or Wade Wilson. If Doomsday is a rip off of the Hulk, the Hulk could be a rip off of Solomon Grundy (came out 15 years or so before the Hulk). Hank Henshaw and Reed Richards. The list goes on.