So I’ve been looking for a new game for some time. I didn’t think Star Wars: The Old Republic was going to be the one as I was really looking for something brand spanking new–not a game with merging servers. To me, merging servers means a dying game. Though with a brand like Star Wars, no doubt many players not used to MMORPGs gave it a shot and didn’t stay long. Those remaining may prove to be a dedicated community and that means expansions and fun for years to come.

So why Star Wars? Well first, I wanted to play a game with an old EverQuest friend. It’s been almost a decade since we’ve played a game together for more than just a day or two. I knew he had some interest as well. Second, I sell a variety of licensed merchandise for SWTOR and I figure if people are buying the shirts, keychains, stickers and necklaces then the game can’t be that bad. See the ad at the end of this post for a few of my currently available goodies(Update: My SWTOR stuff is sold out but I still have tons of [Star Wars]

I’m playing on the Jung Ma server (Update: decent population though Empire outnumbers Republic). Why Jung Ma? Well I wanted PvP. Especially if we’re talking Jedi vs Sith! Jung Ma is a “RP PVP” server which the RP means “roleplay.” Back in the old days of EverQuest there were some roleplay servers though I never got far into any characters on those servers though I heard rumors that there wasn’t much RP on those servers either. I thought perhaps there might be a chance on this server. I’m not sure I’m nerdy enough to really get into the roleplay and I’m not a big enough fan of Star Wars to really know all of the lore. Even so, if there was a chance then I wanted to see it in action. I also thought perhaps the RP might deter some of the 1337 N00BZ that are in every video game. (UPDATE 7/16/2013: There is not a lot of RP so far but I’ve seen some instances of it).

The game is now entirely free to play. In theory you could play this game without ever paying a dime. Though like with any free to play game, you’ll end up spending time instead of money. Is this game pay to win? Not from what I’ve seen (Update 12/16/13: Not really pay to win more like pay to look bad ass). Definitely pay for advantages but I don’t yet believe the advantages imbalance the game.

There is also “preferred” status. For $4.99 you can buy 450 cartel coins which are used to buy things in game. I did this after my 3rd day of playing the game. The most noticeable difference with preferred status is the level 15 skill “sprint” becomes available immediately. Sprint allows you to move 35% faster when not in combat. With the cartel coins I’ve bought some extra bag space for my character.

The third player type is your subscribers. Known as “subs” in game, I became a subscriber after my first week of playing. This opens up many doors though being a subscriber does not instantly hand you everything. There’s still many things that you may wish to purchase in the cartel shop. Subscribers earn more experience while questing. Subscribers are also able to carry more currency around which will matter at the later levels if you have expensive tastes.

Pros:
Some of the pros so far have been: Great story. I made a Sith Inquisitor and right away I was interested in my character. The game has many cinematic type moments (cutscenes) where your character has 2 or 3 possible responses to choose from. Sometimes these choices increase your influence with the dark or light side. Yes, the empire characters can have a high reputation with the light side. While your dark side character likes to kill his foes, the light side likes to see him arrested and tortured. Yay! Though a few pieces of gear and weapons require light or dark influence, the light or dark side choices mainly affect your story. A tip for those new to the game: When you are choosing your answers there is a circle to the left of the yellow buttons. Hover over each response before choosing and note the circle. It will show the Dark side and light side symbols if your answer will result in light side or dark side changes. If you don’t see this, you might need to enable it in your preferences.  Mine was enabled by default.

When you reach level 8-10 you will likely have a quest to complete which will give you your first companion. He is an NPC that will fight by your side. TIP: You can equip gear/weapons on your companion. If you hit “C” in game (thats the default option) you’ll see your character’s equipment and near the bottom of that window is a tab you can click to see your companion’s belongings. I didn’t know this until my character was level 16 so her companion was still using low level items. What’s really cool and I think unique to SWTOR is that your pet can sell the junk you loot in game. It’s even referred to as “junk” in game! My companion will leave and be back in about a minute with my credits. This means that if you’re a free to play player, you don’t need to worry about having a huge backpack to carry things. Though I usually sell my junk and old gear any time I see a vendor.

The Imperial Fleet, the Vaiken Space Dock, is a space station you travel after leaving Korriban or Hutta on your journey to Drumand Kaas. To compare the Fleet to Deep Space Nine in Star Trek Online, the Fleet wins. It’s definitely a more enjoyable setup. DS9 had some cool things like Qwark’s Bar (without Qwark!) but it felt too small to me.

Cons:
Free to play is heavily restricted. Even the ability to emote is restricted to subscriptions! There are certain emotes that are still restricted for subscribers so you’ll need to buy them from the Cartel shop or the in game auction house. Though to be fair, the developers are constantly adding new dances, emotes and moods so they had to find some way to pay those guys.  Even once subscribed all of the races are not available. With such a vast galaxy, it would have been nice to be overwhelmed with race choices. Instead theres just 9: Human, Cyborg, Mirialan, Miraluka, Zabrak, Pureblood Sith, Twi’lek, Rattataki and Cathar.  Update: Togruta will be coming in late 2015 or early 2016.

Targeting: you can’t see your target’s target(Update: There is a way to toggle the game’s interface editor to show your target’s target). It is hard to know who has aggro unless you’re watching which way the laser projectiles are going. There is also no easy assist that I can tell so far(Update: there is a focus target you can use and a target focus target’s target; both can be hotkeyed). Groups are also limited to 4 players. If you have a party with two players and 2 companions and a third player joins, one of the companions is sent away. I’d have preferred a group of six as the more people the better but we’ll see how it goes. There are also larger “operations” groups for the raids which let you go with 8 or 16 people with the difficulty adjusting based on whether you have 8 or 16.

There are quests you can repeat on a daily basis called heroics. Heroics also have the cutscenes when giving out the quests and when receiving rewards. It can get repetitive. TIP: Pushing the space bar skips through a few seconds of cutscenes. Another tip: As you level, previous quest experience gets nerfed. Some of the level 10 heroics on korriban were giving over 3300 experience while I was free to play and once I hit level 15 the reward drops to 6 experience.

So how do they make up the nerfed newbie zone experience? Well at level 15 your class trainer lets you learn how to drive speeders! In the Galactic Market on fleet is a vendor selling two varieties of speeders at only 8,000 credits. I opted for the Rendili Watchman: 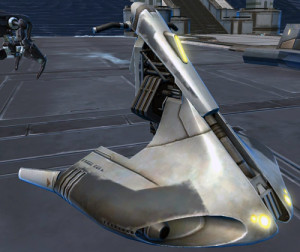 While mounted you move 90% faster than you do normally (the sprint walk is normally just +35%). Now if I had 20,000 credits I could have gotten one that looked closer to the ones used in Return of the Jedi but I’m sure this will be only the first mount of many that I will acquire(Update 2015: I stopped counting once I had 50! lol). After perusing through the action house I found more than a dozen types of mounts for sale–this game offers a lot of unique customization and all with bad ass looking technology(Update: There are over 100 mounts available now between life creatures and vehicles including different skins/paintjobs).

Other thoughts:
One thing this game does to try to encourage you to subscribe is that it shows that subscribers can receive one of two possible rewards while the free to play only get one option. So far as a subscriber, the 2nd reward is lousy gear. So I want 33 armor boots when I’m wearing 63 armor? No thank you.

Update: Star Wars has a ton of ways to gain experience and I’ve yet to grind–in fact with every character, I’ve had much more content than I needed to reach max level. Ready to give the game a try? Click this link and get 7 days as a subscriber for free plus an in-game reward.