I had heard good things about both Conan and Red Sonja comics.  Since I enjoyed the 80s movies, I figured I’d give some a shot.  When I was at Star Wars Celebration 2017 in Orlando, Florida, there was a vendor selling comic books and I found myself buying a few trade paperbacks.  Yes, it’s true.  I went to a Star Wars convention and bought non-Star Wars comic books. I don’t care.  The price was right. 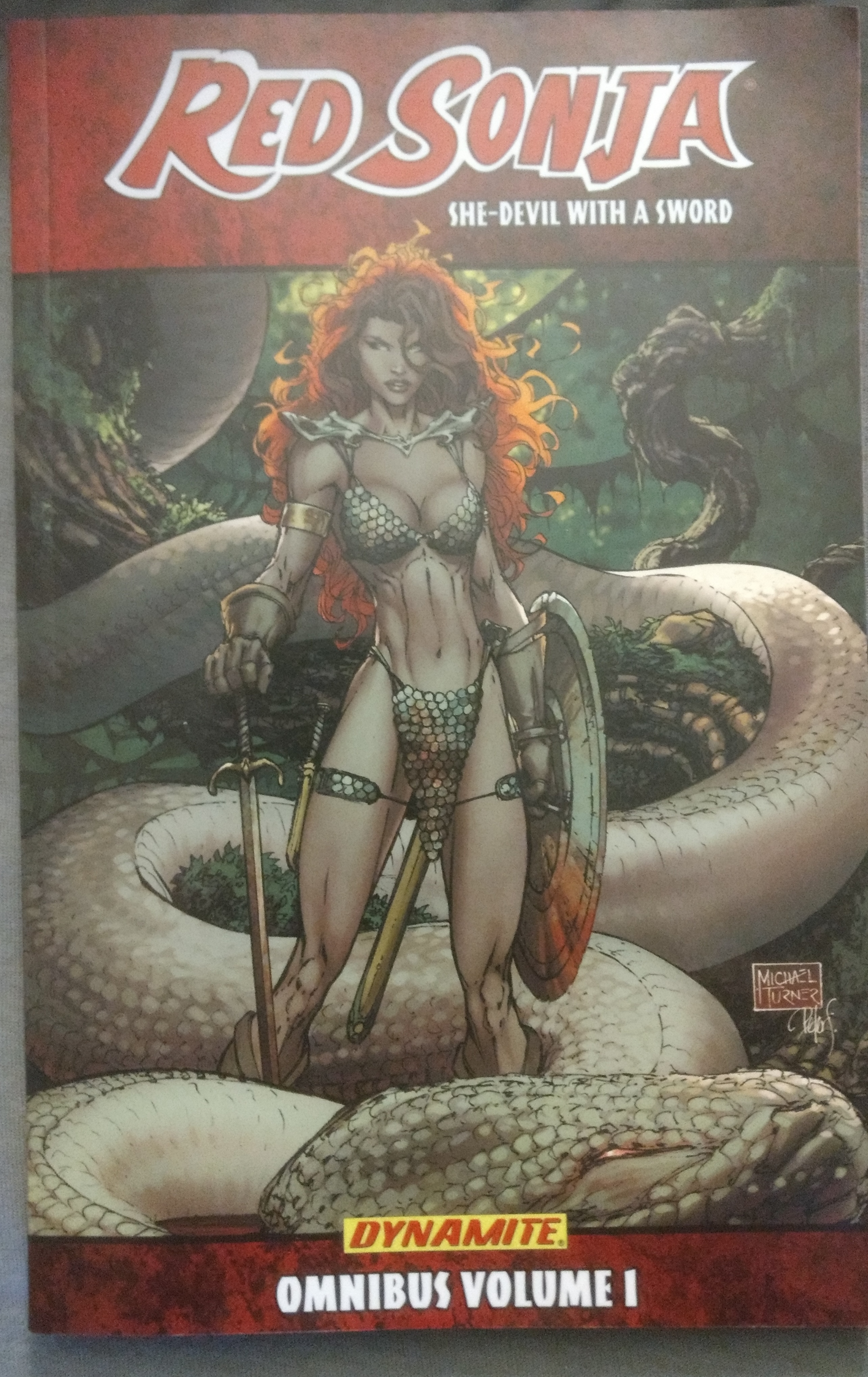 Dynamite Comics is the company behind the Red Sonja stories I am currently reading.  There are 81 total issues (#0-80) and the first volume in the Omnibus has issues 0-18.  Should you [buy the Omnibus], note that issue #0 is between issues 6 and 7.  I assume that was because issue #0 is a side story and there was room for a break between issues 6 and 7.  I really liked the story in volume one.  So much so that I bought the other volumes of the Omnibus when I was at Megacon last month and plan to read the entire series.  I’ve also heard that the main story line which I am about to discuss, completely resolves by the end of [volume 2] and the other volumes are a different story.  The cover price on the Omnibus books is $29.99 which is about a $1.58 per issue which seems pretty awesome to me. 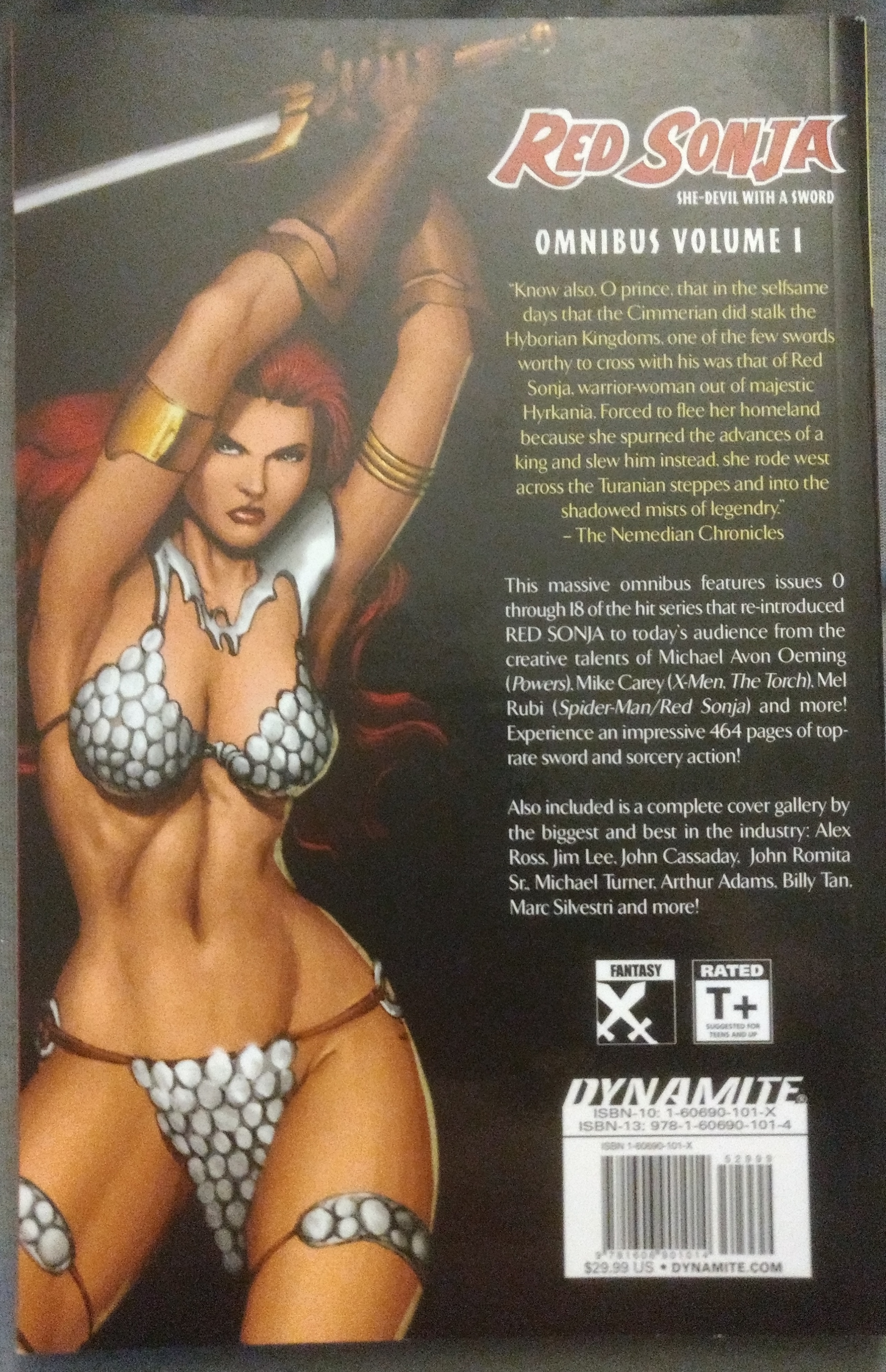 This current Red Sonja is a warrior wandering Hyboria (the world in the Conan/Red Sonja stories) and early in the book she encounters a town with a supernatural cult leader who is worshiping a god referred to as the Borat-Na Fori. 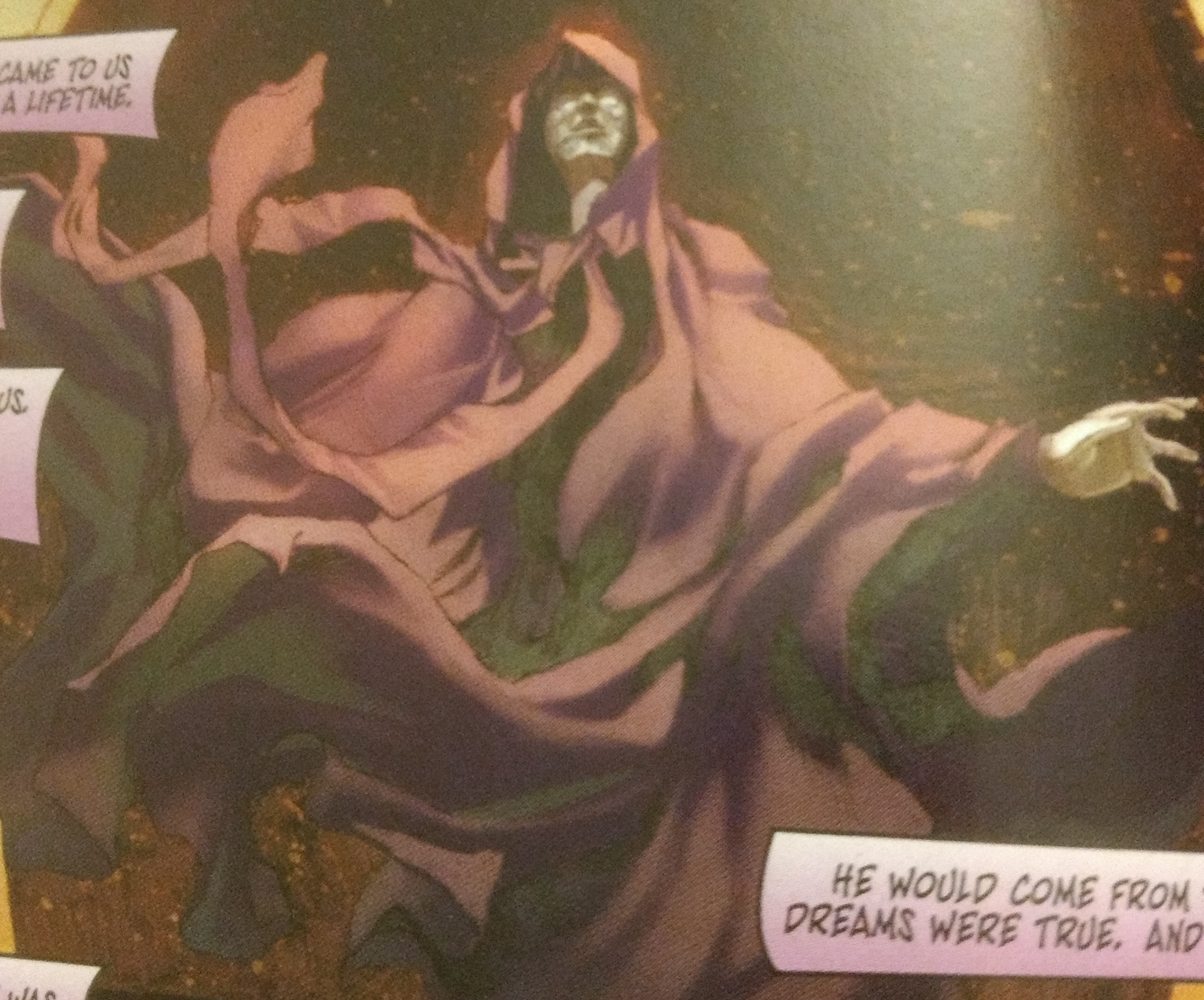 The cult leader is performing human sacrifices and then Red Sonja shows up and there’s a rebellion against this cult leader.  Spoiler alert, the good guy (Sonja) and her allies defeat the bad guy (cult leader AKA lower management).  Meanwhile there’s a woman who married a king in a not so far away land and she is having a baby. That child is a special child (middle management) and he is pissed at Sonja and wants her dead.  Though there is a bigger baddie to deal with(upper management).  The story was actually a lot better than I’ve made it sound but I don’t want to give away the entire story.

In the comic, Red Sonja wears a chainmail bikini and one of the fun things about the story early on is when a male warrior wonders why.  Sonja points out that men stare and don’t often realize she was even carrying a sword until after she’s cut them through.  Which sounds plausible enough. 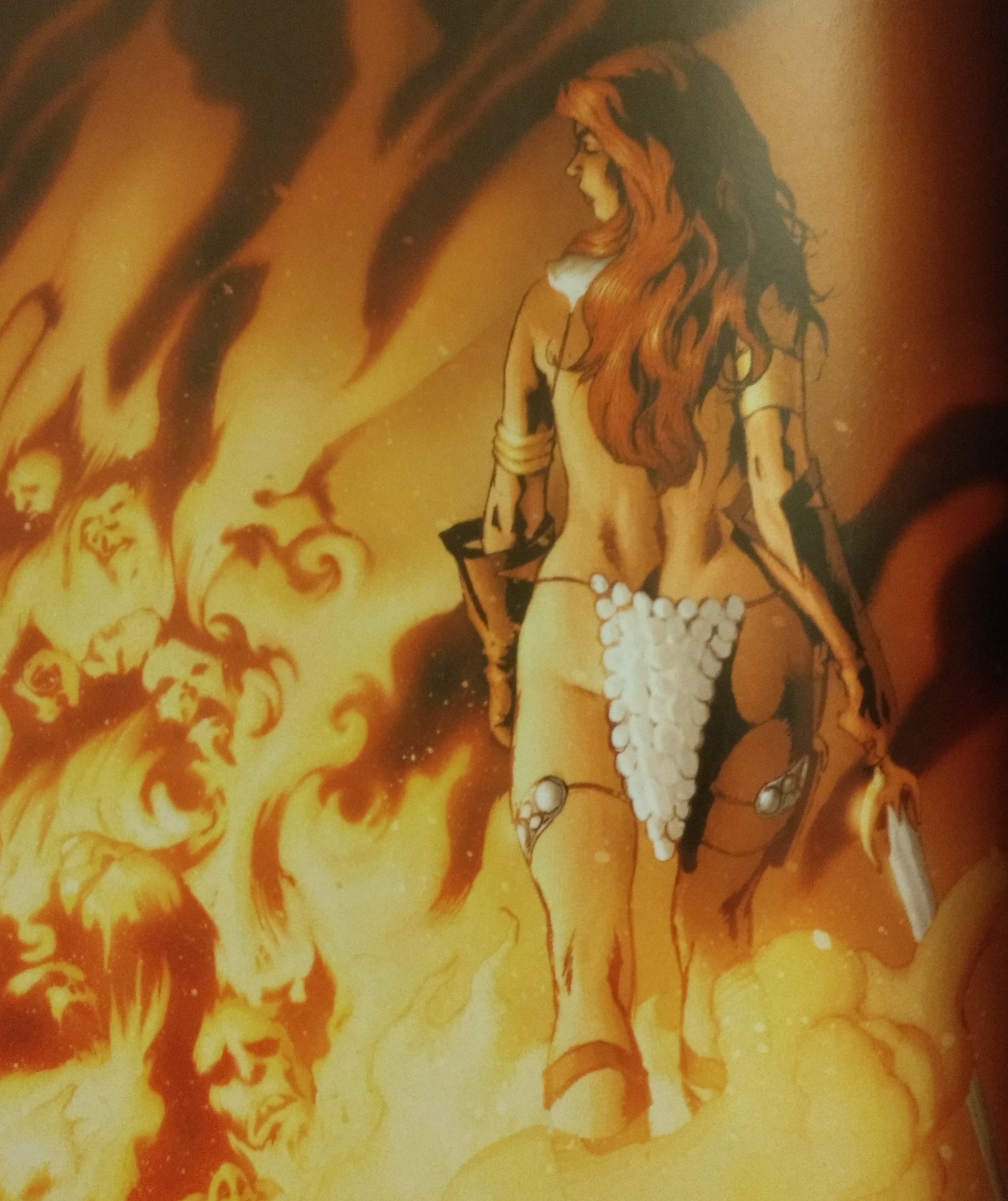 So how much sex is Red Sonja having to go with the violence?  Spoiler: Not a lot.  As it turns out, Sonja has a policy of not putting out unless the man can defeat her in combat and so far, there’s been no man to defeat her just yet.  So far it is unclear if she has any interest, objections or requirements should a female show interest.

There are some flashbacks that are placed in various spots in the book and they were all pretty interesting to read.  Even as a child she was reluctant to do the typical “woman’s role” type stuff you’d find in medieval history.  Her father teachers her about hunting.  Sadly, her origin story is very similar to Batman’s although Sonja herself goes through a bit more extreme experience during and after.  To clarify, their origins are similar because of the murdered parents, not because she too had a butler guardian.  We also learn that Sonja is favored by a Goddess who helps turn Sonja into a badass.

Here’s a photo of the the current big bad.  It’s only a semi-spoiler as this image was taken from one of the middle chapters of the book.  Sorry for the crappy photo, the lens protector over my camera is cracked so that’s why all of these photos have been less than my usual crappy but less fuzzy photos. 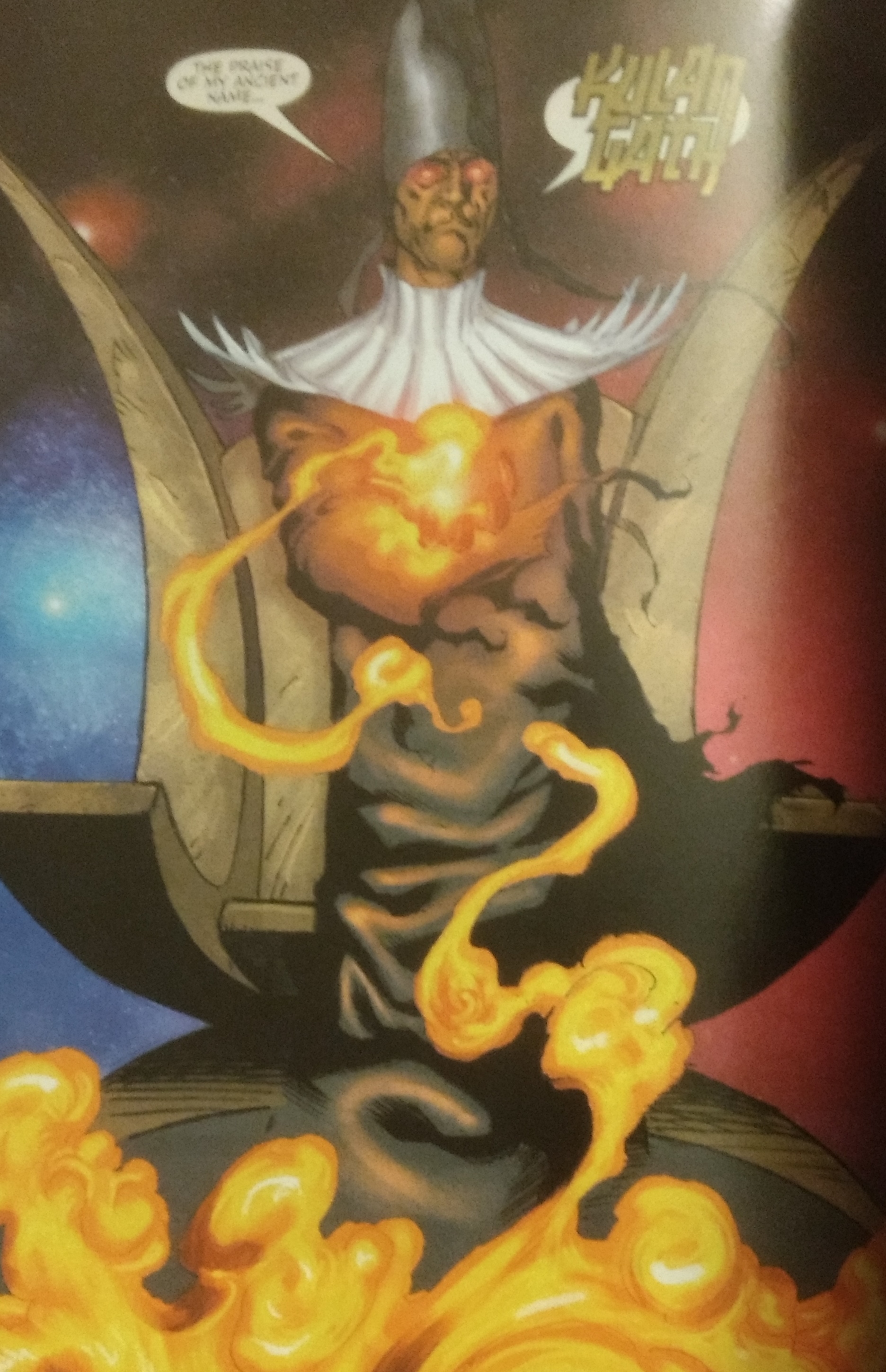 I was peeking around the internet because I’ll do anything to avoid working even if most days I love doing what I do.  It turns out Kulan Gath has had some ventures into the Marvel universe including encounters with Spider-Man and even the X-men.  Apparently there are a couple of stories involving Red Sonja possessing Mary Jane Watson’s body to help Spidey battle this baddie!  I’ll be looking for those issues in the future and will share what I find.

Want your own Red Sonja She-Devil with a Sword Omnibus books?  Here’s some links to them on Amazon where they were priced between $15-25 depending on the volume:

There are also copies of the Omnibus on eBay but as of right now (June 17, 2017) they were all $24 or higher.  Check here: [red sonja omnibus] as there could be some cheaper copies available.