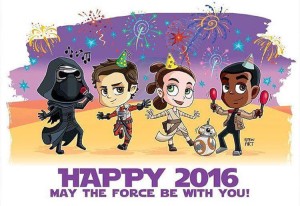 Happy 2016 everyone!  2015 was a great year for Nerdimports.  Our business on eBay and Amazon grew.  I made a number of cool new friends this year including one who brough the above image to my attention (Thanks Amanda!).

So what song is Kylo Ren singing karaoke to?  I’m going to guess it might be a Weird Al Yankovic song.  Perhaps…

X-men Apocalypse — Apocalypse isn’t looking as bad as the internet said he would.  I figured once they handed the film over to the CGI crew — I knew he’d be a buffed as Angelina’s boobs in Tomb Raider.

Teenage Mutant Ninja Turtles: Out of the Shadows — Beebop and Rocksteady in a movie— FINALLY!

Warcraft — I am really psyched about this one.  I hope I am not setting my hopes up too high.

Independence Day — I loved the first one.  Hope this one doesn’t screw it up.

Ghostbusters — Not much to say on this.  Some people were upset that the Ghostbusters were going to be all girls in this movie.  Yeah, as a red-blooded American male, I really don’t want to see 4 babes on screen for 90 minutes.  It will be terrible.  Totally.  Horrible.  On another note, sarcasm is sometimes hard to detect in text.

Ultraman — ok I’m only slight familiar with this but I figure that’s ok.  If they change the entire plot of Ultraman then I won’t notice and won’t hate it.

Star Trek Beyond — I am hoping this is fun.

Suicide Squad — I heard in one of the universes that Harley Quinn is hooked up with Deadshot instead of The Joker.  Should be interesting to see if she chooses one in this movie or not.

Doctor Strange — No trailer yet?!  I assume that’s because all of the money went into a great script, quality actors and cool CGI effects.

Assassin’s Creed — What the heck, no trailer yet?  It is less than a year away and this is a nerd movie.  What is this, 1995?  We demand a trailer now…or as soon as possible. 😉

So yeah I am a bit psyched.  I feel confident I’ll have merchandise for all of it to shamelessly promote on this site.